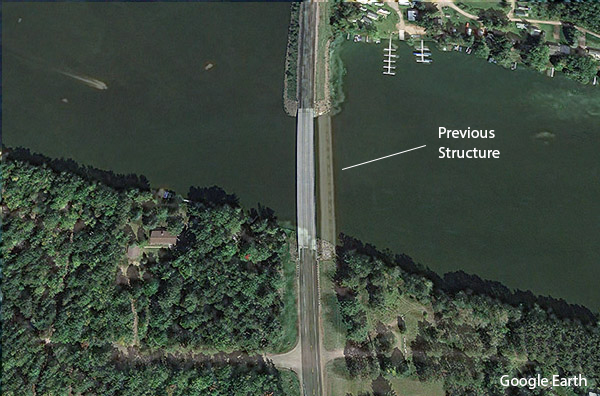 By Dave Pantzlaff, PE
Quite often in our world of designing bridges for clients, we come across situations where we cannot simply close the road, take out or rehabilitate the existing bridge, and provide a detour for the public while the bridge is under construction.

Maybe the bridge is on a dead-end road, providing the only means of access to homes and/or businesses. Or maybe the nearest bridge is dozens of miles away, making a detour so lengthy that it would be impractical to send drivers around the construction. Sometimes the bridge being replaced is on an interstate or major highway that carries large volumes of traffic and must stay open.

Whatever the case, we have options for replacing or rehabilitating a bridge when a detour is off the table. 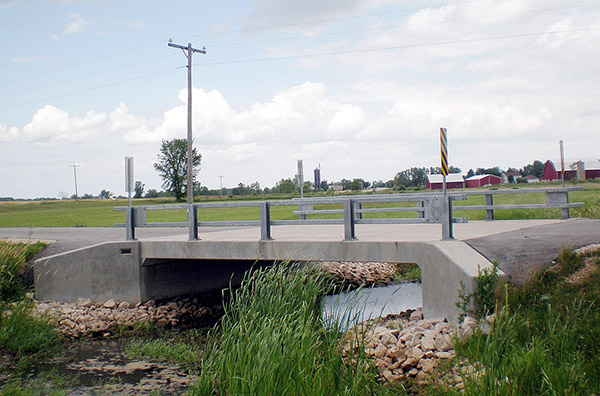 A good example of the use of a temporary bypass is a bridge we designed in Kewaunee County on Moede Lane, which is a dead-end road leading to a residence and farm.

Another common construction technique to avoid a detour is building the bridge in stages, which typically involves working on the bridge one side at a time. Traffic gets shifted to one side of the bridge during work on the other side in the first stage. The process is reversed during the second stage, keeping the bridge open throughout construction. This sometimes involves reducing traffic to a single lane, using stop signs or traffic signals to alternate which direction the traffic flows on the single lane.

Staging was used in the City of Menasha, Wisconsin, on its 3rd Street bridge, which is the only access point for approximately 50 property owners. Three separate construction stages were required to maintain traffic during construction, and the project involved temporary shoring of the embankment during excavation. 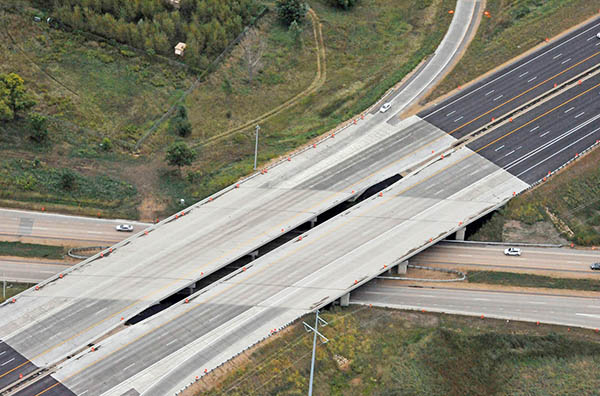 The staging process can get much more complicated, such as on I-39 over US 51 near Madison, Wisconsin. Two-way through traffic was maintained during the widening of the dual bridges, but ramp closures were needed. In some instances, traffic backups can be prevented by strategically limiting lane closures to nighttime hours, when traffic volumes are significantly lower.

It sometimes makes sense to build a new bridge at a nearby crossing location, often right next to the old bridge. That allows traffic to remain on the existing roadway during the installation of the new bridge. In this situation, the existing bridge is used throughout the construction period and then torn down after the new bridge opens.

The new-alignment technique was used on State Highway 27 in Chippewa County, Wisconsin, to avoid a lengthy detour and adverse effects to nearby businesses. The old bridge was just east of the new bridge.
At Bible Camp Road in Crawford County, the road provides access to a camp retreat on a dead-end road. For this project the bridge location was shifted approximately 50 feet south to allow for uninterrupted traffic flow and for the existing roadway to remain open during construction.

When speedy construction is of the utmost importance to a client, accelerated bridge construction (ABC) can help. Our bridge design of I-39 over Siggelkow Road in Dane County, Wisconsin, included precast pier elements, which consisted of the pier columns and pier cap. These pier elements gave the contractor the opportunity to construct them off-site, where they were then transported to the project site and installed much faster than with traditional construction methods. The ABC process ultimately helped minimize road closures and save time on this $5.7 million project.

Dave Pantzlaff has managed Ayres Associates’ structural engineering team in the Midwest since 1990. He has been involved in a variety of structural design projects, including dams, bridges, buildings, tanks, and walls. He oversees the design of local highway structures, large bridges on major rivers, complex interchange structures, and various pedestrian bridges.