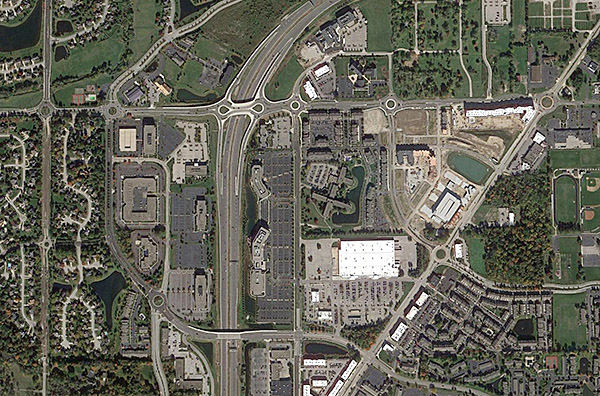 Captured in Google Earth, this 1-mile stretch of West Main Street in Carmel, Indiana, has seven roundabouts lined up, with three more just to the south. The city of about 85,000 people has close to 100 roundabouts, which is one of the highest concentrations of roundabouts in the United States. 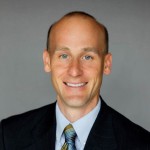 Transportation and traffic engineers from around the world have gathered in Green Bay, Wisconsin, over the past three days for the 5th International Conference on Roundabouts, where they studied many roundabouts in action. The event was organized by the Transportation Research Board (TRB) and hosted by the Wisconsin Department of Transportation and the University of Wisconsin.

So why did we converge on Green Bay? It turns out that northeastern Wisconsin is a hotbed for roundabouts. There are close to 70 in the Green Bay metropolitan area, including a number of complex, three-lane designs and several corridors of multiple roundabouts in a row. But the roundabout crown goes to Carmel, Indiana, pictured above, which has one of the highest concentrations of roundabouts in the United States.

Roundabouts reduce serious traffic crashes. According to the Insurance Institute for Highway Safety, roundabout use has resulted in large reductions in injury and fatality crashes. Roundabouts accomplish these significant safety improvements by slowing traffic speeds, reducing the number of traffic conflicts, and allowing motorists to make easier decisions. They provide a safer alternative to traffic signals and stop signs. For some basic roundabout how-to information and some examples of Ayres-designed roundabouts around the nation, click here. 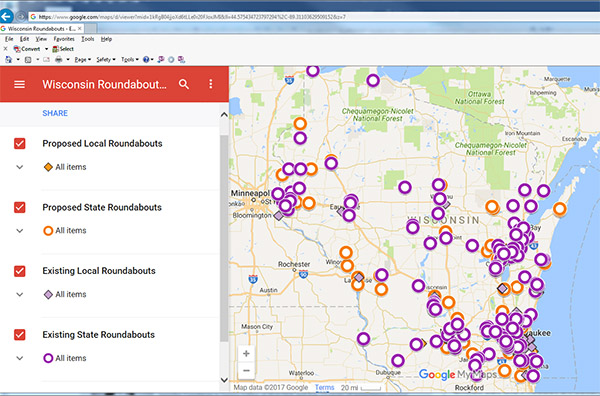 Wisconsin has embraced the design of roundabout intersections. The Wisconsin Department of Transportation has an interactive map showing existing and proposed roundabouts. Click on the image to view the map.

Roundabouts have always been more popular in Europe than in the United States, but a roundabout explosion began in this country in the 1990s, with some states embracing the intersection design more than others. According to the roundabout database hosted and maintained by Kittelson & Associates since 1999 as a service to the TRB’s Committee on Roundabouts, the states of Washington and Florida lead the United States in the number of roundabouts/traffic circles with more than 300 each. North Carolina, Wisconsin, and California are next in line, having between 250 and 300. Arkansas, Oklahoma, Rhode Island, South Dakota, Vermont, and West Virginia all have fewer than 10 roundabouts each. 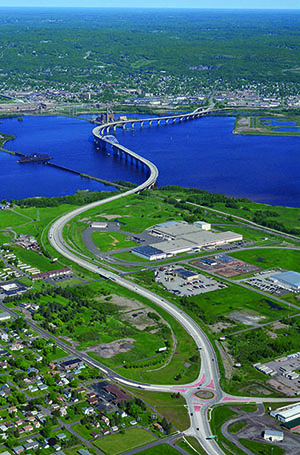 A highlight of the International Conference this week was four bus tours around Green Bay, each highlighting a different aspect of roundabouts. One tour focused on roundabout design for trucks, another on pedestrians, and a third on bicyclists. The tour buses stopped at several sites to observe roundabouts operating under live traffic.

A fourth tour, on which I had the honor of assisting as a guide, did not make any stops and instead tried to hit as many roundabouts as possible in 90 minutes. I worked on the design of all 19 multi-lane roundabouts we toured; we also checked out five single-lane roundabouts. During the 24-roundabout tour, it was good to see traffic moving smoothly and safely through the roundabouts I had a hand in designing.

Kevin Kuhlow, PE, is a leading roundabout designer in the United States. He has focused on roundabouts for the past 17 years, including feasibility studies, operational analysis, design, review, construction observation assistance, and training. He has been involved with developing hundreds of roundabouts throughout North America since 2000. With Kevin on staff, Ayres Associates has a growing portfolio of roundabout designs.