What Is Bridge Scour? Why Should You Care? 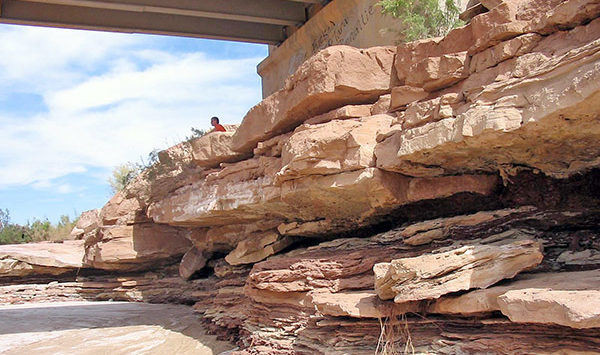 Scour shown in rock at a bridge in southeastern Utah.

The most common cause of bridge failures is from floods scouring bed material surrounding bridge foundations. What is scour? Simply put, scour is the engineering term for the erosion of soil surrounding a bridge foundation (piers and abutments). Bridge scour occurs when fast-moving water around a bridge removes sediment from around the bridge foundation, leaving behind scour holes. These holes can seriously compromise the bridge’s integrity.

So why care about scour? Approximately 82 percent of the roughly 600,000 bridges in the National Bridge Inventory are built over waterways. Many, especially those on more active streams, will experience problems with scour, bank erosion, and channel instability during their useful life. The magnitude of these problems is demonstrated by the estimated average annual flood damage repair costs of approximately $50 million for bridges on the federal aid system. 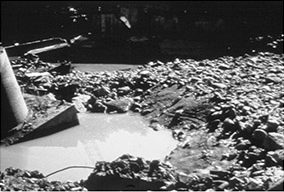 I-90 over Schoharie Creek in New York collapsed in April 1987, killing 10 people. Evident in the photo is the scour hole that resulted from erosion during numerous high flow events.

Highway bridge failures caused by scour and stream instability account for most of the bridge failures in the United States, resulting in substantial repair and replacement costs. In fact, the indirect costs associated with a bridge failure have been estimated to exceed the direct cost of bridge repair by a factor of five. A 2014 report in the Journal of Mechanics and Geotechnical Engineering says scour of bridge foundations is the number one cause of bridge collapse in the United States, and 600 bridges have failed due to scour problems in the past 30 years.

It’s essential to pay attention to hydraulics when designing a bridge. The American Association of State Highway and Transportation Officials (AASHTO) standard specifications for highway bridges include requirements to address the problem of stream stability and scour when it comes to bridge design. These state that hydraulic studies are a necessary part of preliminary bridge design and should include, in part, estimated scour depths at piers and abutments. 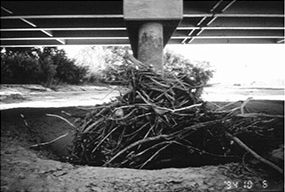 This photo shows bridge scour increased by debris at a bridge on the Rio Grande near Bernardo, New Mexico.

Although it’s difficult to be precise regarding the actual cost to repair damage to the nation’s highway system from problems related to bridge scour, the number is obviously large. Scour equations published by the U.S. Federal Highway Administration (FHWA) provide the latest quantitative guidance to bridge owners for risk-based and data-driven bridge foundation design and maintenance and evaluation for scour critical status in bridges on the national highway system. The end result is more efficient use of highway resources and a reduction in costs associated with the impacts of bridge scour on highways. 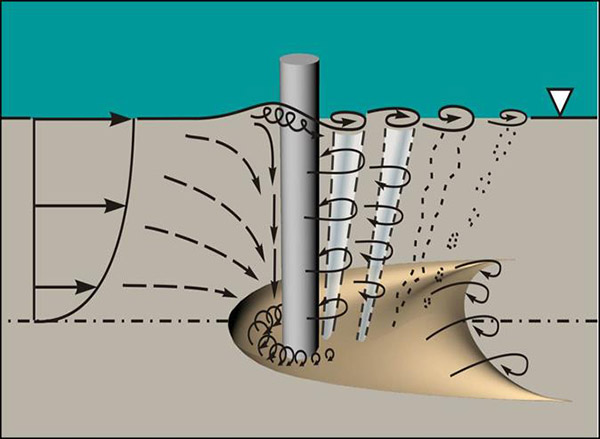 This drawing shows how a scour hole forms around a bridge pier.

The U.S. Department of Transportation Federal Highway Administration has a list of principal documents related to bridge scour on its website, including “Evaluating Scour at Bridges, Fifth Edition,” which presents the state of knowledge and practice for the design, evaluation, and inspection of bridges for scour. The publication’s authors include Ayres’ Pete Lagasse, PhD, PE, an authority on bridge scour. The FHWA National Highway Institute offers courses on Stream Stability and Scour at Highway Bridges that provide participants with comprehensive training in the prevention of hydraulic-related bridge failures.