Structural and geotechnical engineers count on support from the soils beneath a foundation to help provide motorists safe passage from Point A to Point B. In many states, bridge foundation support is achieved by piles that are driven deep into the ground.

The piles penetrate and are embedded in the soils immediately beneath the bridge and rely on contact or “friction” with the soil along the perimeter, and possibly the resistance at the pile tip from the hard subsurface layers, to support the bridge foundation. This embedment stabilizes the bridge against the erosive forces created from the flowing water the piling is standing in.

But what if a bridge’s foundation is unknown? How could the load-carrying capacity of that bridge be assessed with any level of confidence? 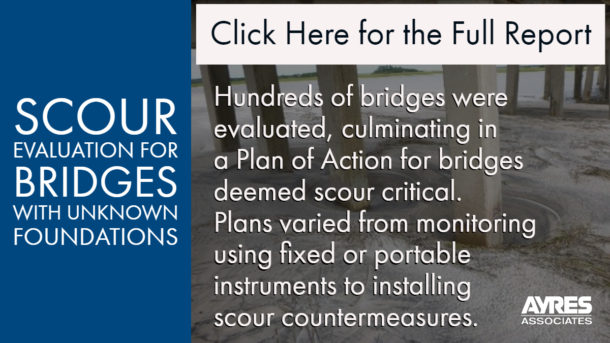 This was the challenge facing a team of four consulting firms who, over the last two decades, studied and analyzed more than 1,500 such bridges for the Florida Department of Transportation (FDOT).

Older structures’ pile-driving records often are missing or incomplete – making their foundations unknown. Extra steps must be taken to evaluate them and determine their risk of instability, particularly after a storm when scour comes into play or when the bridge is subjected to heavier loads than it was originally designed for.

Scour: A Threat to Infrastructure

Scour – a naturally occurring process where flowing water removes riverbed sediment from around bridge piers and abutments – is recognized as the No. 1 cause of bridge failures in the United States. Without adequate design and countermeasures in place, scour can destroy infrastructure and undermine bridge foundations. Scour vulnerabilities can yield catastrophic results, including bridge collapses and, in worst-case scenarios, motorist fatalities. 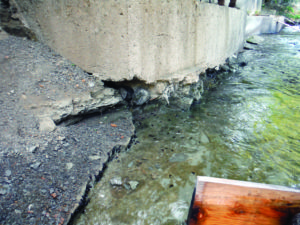 Ayres Associates and GCI Inc., in partnership with Kimley-Horn and Associates and STV Incorporated, used innovative, state-of-the-art methods, including their pioneering “static/back-calculation technique,” to determine reasonable minimum embedments of pile foundations where pile-driving records are lacking. The team developed the first rational method for accounting for the substructure load rating at different scoured mudlines and integrating it with the superstructure load rating. Their methods have been published in peer-reviewed journals and presented at national conferences. Numerous presentations by Ayres Associates and GCI have helped bring attention to these techniques and concepts.

In the end, the team’s work has become the gold standard for the evaluation of bridges with unknown foundations for the impact of scour. The team’s efforts give bridge owners and motorists alike peace of mind that the structures they travel across every day are safe from scour.

The project was a massive endeavor for FDOT and its many stakeholders, and the team’s efforts are poised to pay dividends through increased safety for the many motorists traveling across the state’s bridges and through proactive preventive maintenance. For these reasons and more, the Florida Institute of Consulting Engineers recognized the scour evaluation project with a 2017 Grand Award for Engineering Excellence. The project went on to earn a National Recognition Award in the American Council of Engineering Companies 2017 Engineering Excellence Awards competition.

Ayres Associates’ FDOT scour evaluation efforts have been led by Hisham Sunna, PhD, PE, who attended an award ceremony August 4 in West Palm Beach. Hisham discusses the undertaking in this 2-minute video, which highlights the award.

Want to know more? Check out the story on “Fighting the Forces of Nature” in the latest issue of TRENDS magazine. You can also read more about the FDOT project that started it all.