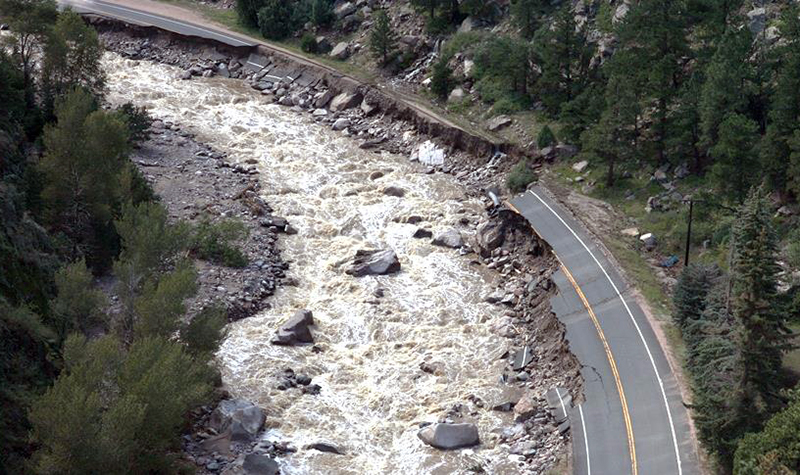 This location along US 34 between Estes Park and Loveland was damaged in Colorado’s September 2013 flooding. The 2D hydraulic modeling shown below, depicting high-energy locations along the Big Thompson River, clearly match with where flooding scoured away bank protection and washed out the highway.

By Ellen Faulkner, PE
While we’ve long had tools to study and predict erosion and sedimentation along rivers, these days 2D modeling is providing a simpler route to more robust analysis. In many cases a 2D hydraulic model can provide the desired information without the costlier, more complex effort of sediment transport modeling.

Sediment transport modeling is noted for its intrinsic uncertainty, its reliance on a collection of empirical equations that can give significantly different answers from one another, and its need for field data about sediment composition and upstream supply. However, simpler 2D model analysis techniques can deliver reliable results at a lower cost for the client. Evaluating the 2D hydraulic characteristics effectively points out areas that could use protection from erosion or deposition – whether that be erosion-prone areas where riprap or sturdy vegetation could offer a defense against swift currents or the installation of a vane or similar structure in a channel to encourage water to carry sediment past a sedimentation-prone location.

But ultimately in the world of modeling, there is a place for everything – 1D modeling, 2D, sediment transport modeling, and even 3D modeling. While we’re emphasizing 2D in this post, each tool should be deployed where appropriate, given the client’s needs and budget.

Showing the Accuracy of 2D Modeling for Scour Locations

2D models can help identify locations where flow conditions are likely to cause scour or displace riprap. We can even use the 2D model to guide the riprap design by mapping sizing calculations. These 2D hydraulic model results for this location along US 34 between Estes Park and Loveland show quite clearly the high-energy locations along the Big Thompson River where Colorado’s September 2013 flooding scoured away the protection.

With this validation of the modeling technique, Ayres Associates completed model simulations of future design flood conditions for the proposed configuration to guide protection measures for the reconstruction of US 34. The results of the modeling were used in several ways: to determine the correct size of rock riprap for protecting the highway embankment; to figure out how deeply the embankment protection needed to be embedded into the ground; to assess the impacts of access bridge design; and to determine any potential negative impact of the design on the opposite bank. The level of locational detail that 2D modeling provides can save clients significant money, as clients don’t have to assume maximum protection (at great expense) is necessary in every location – only in the areas indicated as high-energy by the modeling.

By using 2D modeling, we are able to map likely areas of bed erosion and deposition, relating them to operationally or ecologically sensitive parts of the stream reach. The modeling, which provides a planning-level map of what areas need to be considered for possible protective measures, can analyze the results of a theoretical flash flood due to an upstream dam breach, a sudden thunderstorm that brings torrential rainfall to the watershed, or even a landslide into a reservoir or stream.

In a recent project analyzing the likely results of an event releasing unusual volumes of water and sediment downstream, Ayres Associates first developed a 1D hydraulic model to help evaluate the flooding hazard posed to downstream structures, facilities, and population. Ayres then built upon the 1D flood wave hydrograph, using SRH-2D modeling to route the hydrograph downstream to assess the potential for sediment deposition.

What Data Goes into a 2D Modeling Project?

The computational grid for an SRH-2D model is an unstructured mesh, allowing for greater detail in the project area and less detail in areas less hydraulically critical to accurate computational outcomes. The 2D modeling requires accounting for “boundary roughness” – in the form of Manning’s “n” values – along the studied reach of a river. This accounts for the effects of differing levels of friction along the path of floodwaters, ranging from the relatively low friction presented by cultivated croplands bordering a river (Manning’s “n” value of 0.037) and the relatively high friction in a mixed forest area (Manning’s “n” value of 0.40).

Stream power – the rate of the energy of flowing water that is expended against the riverbed and banks – indicates areas where erosion may be taking place (high power) and areas where deposition is likely (low power).

Modeling is often run within a range of scenarios – from the most likely, least dramatic event to the least likely, most severe event. One of our recent analysis projects ran Scenarios 1 through 5, from less severe to most severe.

Scenario 1 showed channel velocity at 4.5 to 20 feet per second in a steep reach, indicating little potential for deposition, while velocities through a fish channel habitat were 2.5 to 12 feet per second, resulting in likely deposition of sediment in this area.

In the worst-case Scenario 5, while the peak flow and sediment load would be higher, the model showed velocity in the fish channel habitat location would be high enough to significantly reduce deposition there.

A 2D model also differentiates among different sizes of sediment particles. For example, 0.003-inch sediment will not be deposited as readily as 0.187-inch sediment, remaining suspended after the larger particles have been deposited.

The resulting data, therefore, in 2D modeling is granular enough (pardon the sedimentary pun) that it provides valuable information for decision-makers considering where protective measures are warranted, whether it be strategically placed erosion-preventing bank protection where it’s most needed or structures within the river that discourage deposition in an environmentally sensitive area.

Ellen Faulkner, PE, has three decades of experience in developing and executing studies in watershed hydrology and river hydraulics, with an emphasis on floods and dam safety. She completes floodplain and dam safety analyses for communities and dam owners and has completed instream flow studies and analyses of alternative hydropower operation rules.