Courtesy of Wisconsin Department of Transportation.

By Alexander Cowan, PE, PTOE
For over a decade, diverging diamond interchanges (DDI) have been efficiently moving traffic throughout the United States. The simplicity, safety, and genius of the innovative DDI is best grasped by looking at the red arrows in the Wisconsin DOT illustration above. Notice how the red-arrow traffic on the secondary roadway (flowing from bottom to top) starts out toward the right to allow conflict-free access to the on-ramp at right and then transitions to the left to allow conflict-free access to the on-ramp at left. 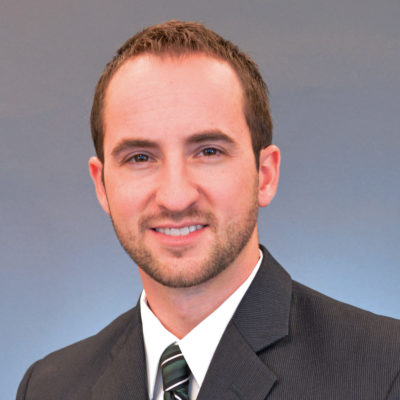 Alexander Cowan, PE, PTOE, is a traffic engineer based in our Waukesha, Wisconsin, office. He has over 14 years of experience in intersection and signal design, traffic analysis, and transportation management plans. Alexander specializes in microsimulation modeling.

Often using the same overpass infrastructure and a similar pair of signal-controlled intersections that typifies the standard diamond interchange, the DDI reduces the potential conflict points from 26 to 14 while moving traffic through the corridor faster. The safety benefits derive from the fact that left-turn movements can take place without crossing any lanes of traffic. The operational benefits arise from simplifying the traffic signal operations to just two phases, eliminating the left-turn-arrow phase. That improved flow heads off the need for adding lanes to get increasing traffic loads through the interchange.

A bike lane can be integrated to the right of the vehicular lanes, just as on any roadway. DDIs can also include pedestrian intersection crossings and walkways. Some DDI designs place a single walkway in the median, protected by concrete barriers.

Here are a few more details on the feasibility and flexibility of the DDI design concept:

How Common Are DDIs?

Judging by a recent road trip I took, there are plenty of DDIs popping up in a number of states. The DDI is still in its infancy but is catching on since the first one was completed in Springfield, Missouri, in 2009. According to the diverging diamond interchange post on Wikipedia, there were 123 DDIs in the United States as of November 16, 2020, with 29 more under construction.

What Are the Safety Stats for DDIs?

Citing a study of the Springfield DDI’s crashes in its first year, compared with that interchange’s five-year average before the DDI was constructed, the Federal Highway Administration (FHWA) notes:

What are the Traffic Flow Stats for DDIs?

The FHWA cites another study that finds DDIs are especially effective at improving performance where interchange traffic volume is high, reducing delays 15 to 60 percent and increasing throughput 10 to 30 percent and accommodating twice the left-turn traffic as a conventional diamond interchange.

Contact Alexander Cowan, PE, PTOE for assistance on evaluating design alternatives for intersections and interchanges. Check out the project experience of our traffic engineering and analysis staff on a wide range of highway, municipal, and development projects.