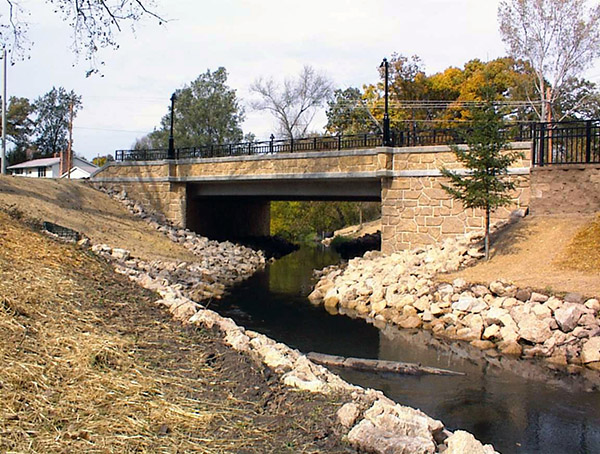 The United States has nearly 600,000 bridges, and our structural engineers have designed nearly 1,500 of them. All are important to their local transportation networks, and all have a visual impact on their surrounding environment.

That’s why good bridge design considers aesthetics as well as structural integrity –and why our bridge designers bring an artistic touch as well as engineering know-how to their projects when the situation calls for it.

Dave Pantzlaff, manager of the structural engineering group in our Eau Claire, Wisconsin, office, notes our bridge designers consider the shape, color, and texture of a structure and its components. Consistency is also desired among multiple bridges within a highway corridor so the various structures carry a consistent aesthetic theme.

Structural engineer Dan Sydow says aesthetic enhancements allow a community to express its local preferences in what can otherwise be considered an ordinary bridge. A bridge is designed to last for decades and often serves as a gateway to a community, so spending time on aesthetics results in a bridge that a community can be proud of for generations.

The Bridge Aesthetics Sourcebook, prepared by the Transportation Research Board Subcommittee on Bridge Aesthetics, notes: “Every structural design is an aesthetic decision. If a decision affects the size, shape, color, or surface texture of a visible part of the bridge, it affects how people will feel about the bridge. For the same reason we would not build a bridge that is unsafe, we should not build one that is ugly. To ignore aesthetics is irresponsible.”

While beauty may ultimately be in the eye of the beholder, here are a few of our bridges that have earned the red carpet treatment: 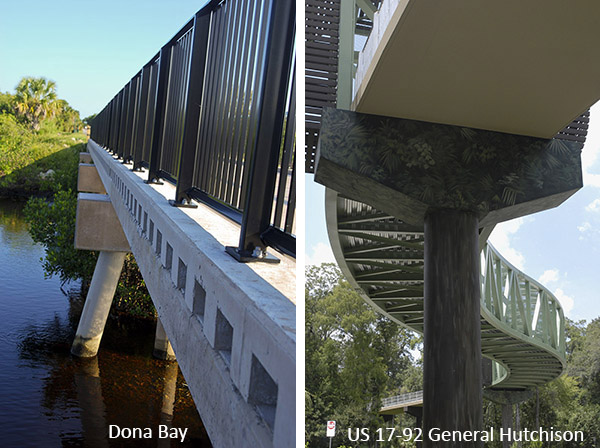 The Roberts and Dona Bay Trail Bridge Replacements in Sarasota County connect missing links in the Legacy Trail, replacing deteriorated trestle bridges. Hisham Sunna, manager of structural design/inspection for our Southeast Operations, says a particularly striking feature is the look of railroad ties along the profiles of the bridges. The contractor and fabricator built a concrete form that “stamped” an indentation at regular intervals to replicate the look.

Seminole County, Florida, also wanted special attention paid to aesthetics for its US 17-92 General Hutchison Pedestrian Bridge, part of the Cross Seminole Trail. The award-winning structure’s muted greens, browns, and grays blend into the landscape, but what makes this structure unique is the 206-foot S-shaped truss bridge that mimics the curvy trail. 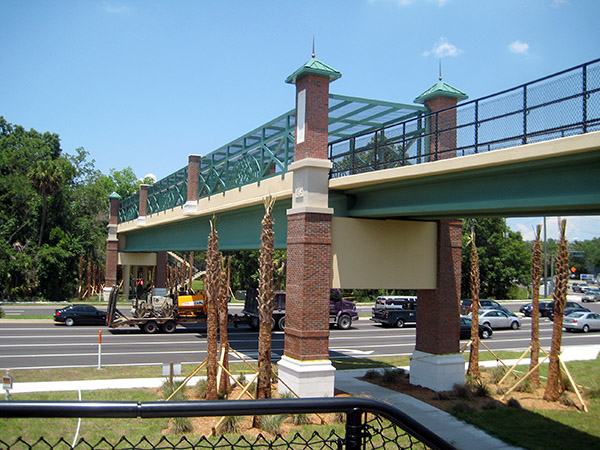 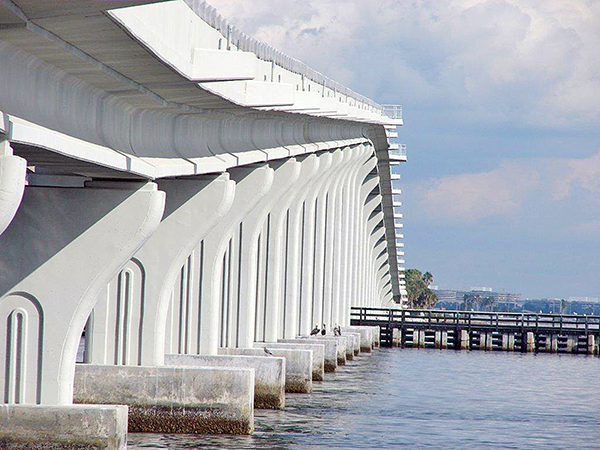 The Courtney Campbell Multiuse Trail Bridge, connecting Clearwater and Tampa, Florida, has strategically placed overlooks from which trail users can enjoy views of Old Tampa Bay. This award-winning bridge also was designed so it would not obstruct views from the main highway. 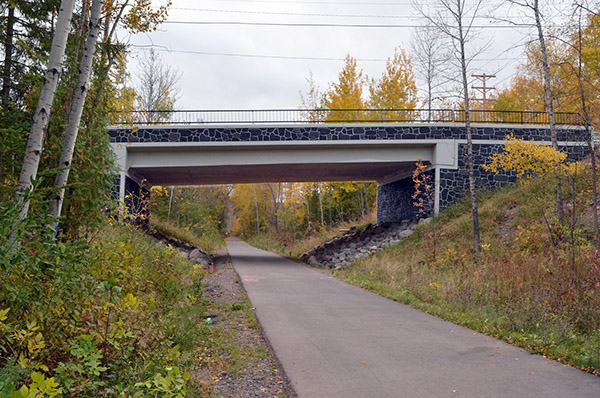 A 48-foot-long concrete slab bridge that carries Spring Street over the Willard Munger State Trail through the City of Duluth’s Riverside residential area includes simulated stone masonry on the abutments and railings. 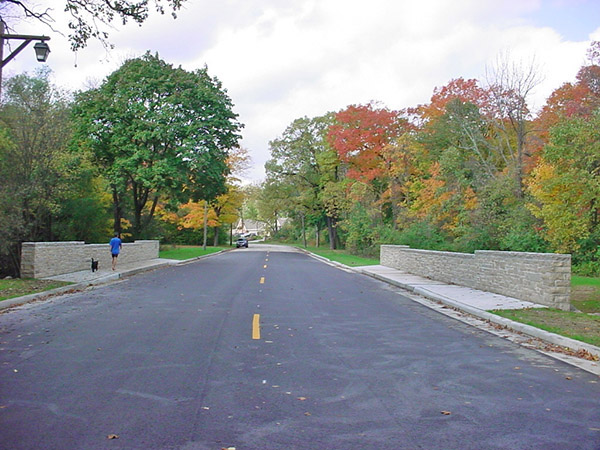 Replacements for the 1933-era Wellauer and Kavanaugh Bridges along Honey Creek Parkway in Wauwatosa, Wisconsin, were designed with hand-laid stone masonry to preserve their historic look. The size, shape, and color of the quarried Lannon stone was carefully matched to provide a natural appearance duplicating that of the original 1933 stonework.

Concrete form liners with a tri-color stain give a masonry look to the River Road and South Street bridges in DeForest, Wisconsin (form liners act as a mold for the concrete, allowing a variety of patterns to be created). Both also feature decorative railings. South Street’s aesthetic treatments will be continued in a new bridge being designed for the Village. 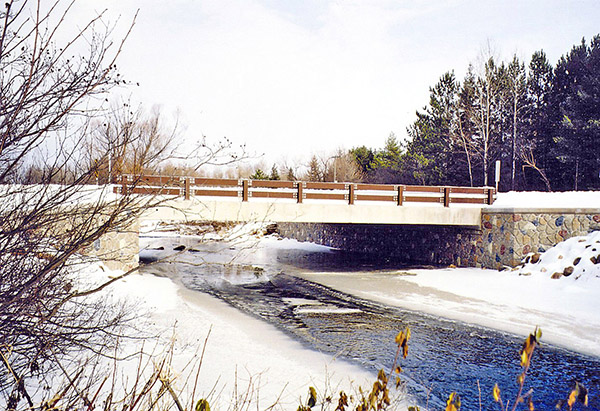 Timber railings were incorporated into the DuPont Road bridge over the Montreal River, which spans the Wisconsin/Michigan border. Local agencies requested these railings because of the proximity of a future park project. Concrete form liners and various stains added color and texture to the abutments and retaining walls in this rustic setting. 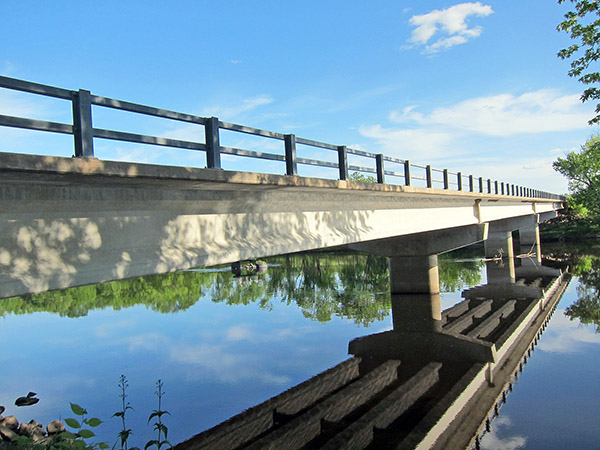 Simple, elegant lines are on display on the Rusk County “E” bridge over the Chippewa River. Repetitive piers and balanced span arrangements, like those seen on this bridge, often provide a sense of order that is satisfying to the observer, especially in serene settings. 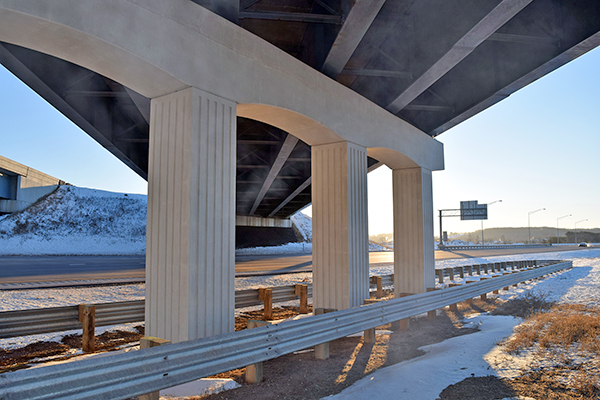 Expanding Wisconsin State Highway 29 between Chippewa Falls and Elk Mound involved constructing 38 new structures. Aesthetic treatments were a key issue, as the Wisconsin Department of Transportation wanted consistency within this 21-mile corridor while making the bridges more visually appealing to motorists. The bridges were designed with arched pier caps and rustication grooves formed into the pier columns.

The next time you cross over – or under – a bridge, take a moment to look closely. You might be surprised at the beauty you find. Share your favorites in the comments below.