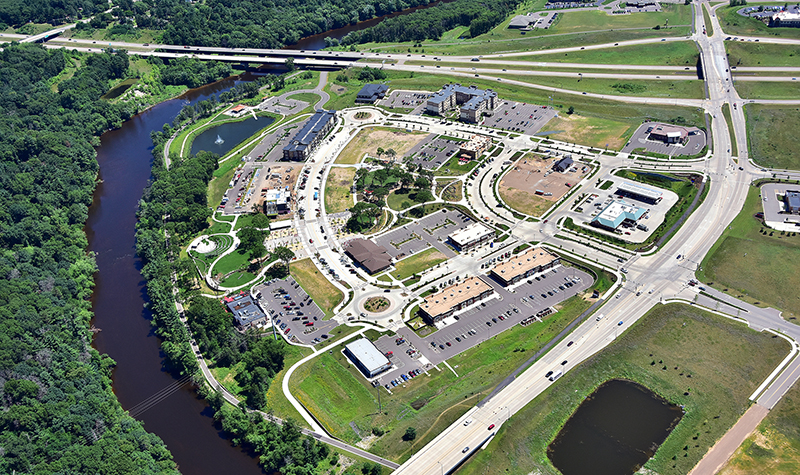 In 2015 the City of Altoona approached Ayres with a dream to create an iconic development that would help launch economic and community growth. The development’s success was contingent upon gracefully merging mixed-use, high-density residential, and commercial spaces surrounding a well-designed public park. The resulting River Prairie development used community-driven placemaking to create a physical park identity that is specific to Altoona’s culture and history.

The award was presented in the WPRA’s over $1 million category. WPRA is a statewide, non-profit service organization dedicated to extending the social, health, cultural and economic benefits of parks and recreation through its network of recreation/park professionals and civic leaders.

Ayres assisted the City with master planning through final design for the rapid development of the River Prairie area, including landscape architecture, site civil and roadway design, and traffic engineering. The 40-acre town center property includes new streets, utilities, public spaces, residential developments, and bustling commerce in what was a largely undeveloped highway interchange area in 2014. Within three years about 95% of a $20 million infrastructure build-out had been completed, and private development had snapped up available space about as quickly as it has become available.

A guiding principle from the start was the placemaking concept of the “Power of 10,” which states that people are more likely to spend time in a space if it provides at least 10 things for them to do. Innovation was embraced at every turn as trees were preserved; an artificial stream was created; and electrical power, Wi-Fi, and audio were made widely accessible in public spaces.