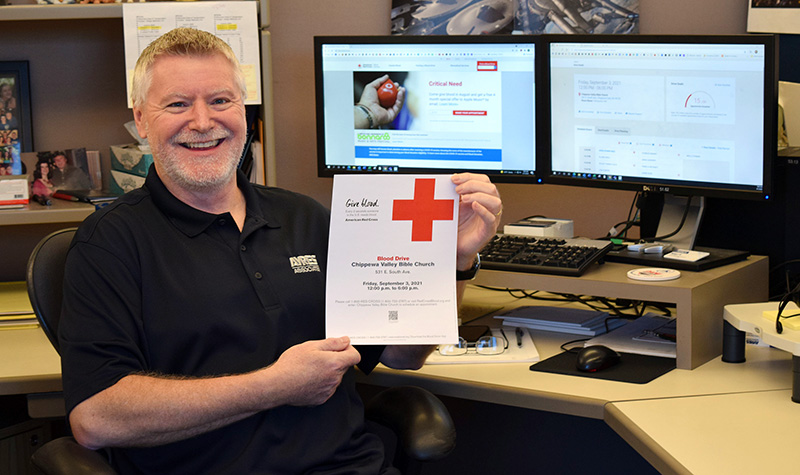 Mark Hedrington, a senior designer who’s worked over 30 years in Ayres’ Eau Claire, Wisconsin, office, recently earned our Owen Ayres Good Citizen Award for his commitment to the American Red Cross. Hedrington began his partnership with the Red Cross over 30 years ago when a co-worker invited him to lunch after they’d first given blood at a local blood drive.

Since 2011, Hedrington has been serving as a blood drive coordinator in partnership with the Red Cross of Western Wisconsin. Working with Red Cross representatives, Hedrington assists with schedule planning and recruits donors and volunteers for each blood drive held at his church, Chippewa Valley Bible Church in Chippewa Falls.

Over the past nine years the blood drives have grown from one or two per year to about five. How it all got started is a notable story. In 2009, CVBC had completed construction of a large addition consisting of a fellowship hall with access to ADA restrooms and its own separate entry and parking lot (designed, in part, and drafted by Hedrington). A Red Cross representative was interested in securing CVBC as a possible hosting site. Hedrington met with Red Cross officials in 2010 and soon began hosting regular blood drives. Red Cross staff members were pleased that the new site offered such a large, open space and stair-free access. Older community donors did too.

COVID-19 has changed certain procedures but has not stopped the collection events at the church. CVBC recently hosted its 50th blood drive and has collected more than 1,200 units of blood. Each unit can save three lives.

Hedrington is modest about his award, saying, “I enjoy serving my community and partnering with the Red Cross while helping to save lives in the process.” He tries to spread the word among his Ayres co-workers, sending periodic emails encouraging them to donate and volunteer.

The Owen Ayres Good Citizen Award is named after our late founder, who shaped our company through his commitment to community in the form of philanthropy and active participation in non-profit organizations that he believed in. This commitment has led to Ayres’ longstanding status as a United Way Pacesetter company, as well as its employees’ reputation for working hard in a variety of organizations and events that benefit each of the communities where we work.