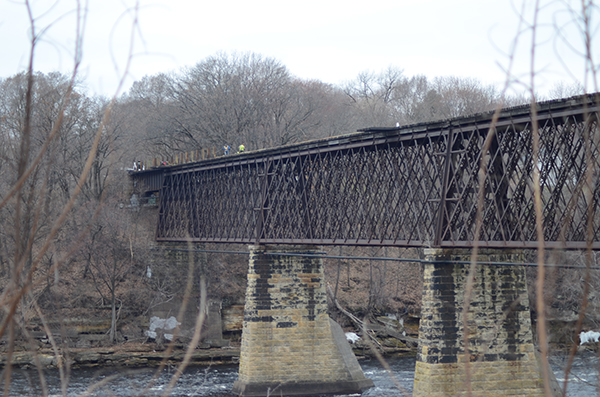 Bicyclists and pedestrians in the northwest quarter of Eau Claire, Wisconsin, are watching with particular interest as construction workers carefully work 80 feet above the frigid Chippewa River, installing new railroad ties, railings, and decking on the aptly named High Bridge. Conversion of this 19th century railroad bridge will provide the first west-side access north of downtown to the City’s extensive trail system. A separate project will extend the trail from this bridge well into the west side neighborhoods. 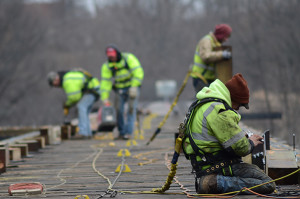 Workers with Pember Companies could be seen on a recent day installing railing posts farther and farther from the west end of the bridge, staying safe by remaining tethered to a cable running down the center of the bridge deck. The tethers allow the workers to reach either edge of the bridge deck while not allowing them to actually topple over the edge. Attractive wire screen railing will be attached between the posts to enclose the 10-foot-wide riding/walking surface.

Once Ayres Associates’ design is fully implemented, five overlook platforms will have been added as part of the deck, providing stunning views of an Xcel Energy dam to the north and bridges and Phoenix Park to the south. At the east end of the bridge, the project will connect to the Forest Street sidewalk to allow trail users to proceed south to Phoenix Park, which is the hub for the growing City trail system.

Work is expected to be done around Memorial Day, just in time for residents and visitors to enjoy a whole summer of views and improved connections to the downtown and the rest of the trail system.

This striking bridge is on the National Register for Historic Places, so the project required approval by the State Historic Preservation Officer. The 1890s bridge – a lattice deck truss – was built during a time when huge rafts of logs were floated down the waters of the Chippewa below, feeding scores of lumber mills that sawed millions of feet of lumber per year. Nowadays software (JAMF) and health care (Mayo Clinic Health System) are among the downtown industries that have replaced the mills. 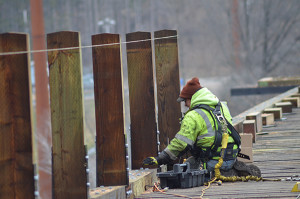 The former Union Pacific Railroad bridge is about 898 feet long, and the overall project length is approximately 1,523 feet long. The structure carried trains until 2007, according to The Bridgehunter’s Chronicles blog. Soon mostly two-wheelers and tennis shoes will ply the bridge. Decorative, pedestrian-scale lighting poles will be attached to the bridge’s ties, and wood decking will be attached to the ties at a 45 degree angle to the direction of travel to provide a smooth ride.

Railings will protect trail users along parts of the approaches where the terrain drops off steeply from the edges of the trail. Ayres’ designers gave special attention to the safety of eastbound bicyclists descending from the bridge toward Forest Street. Signs will warn cyclists of the steep grade, and stop signs at Forest Street will further control their movement so they don’t accidentally roll into Forest Street, where sight lines are diminished by curves and adjacent rail bridge supports.

Project manager Chris McMahon came through for City engineer David Solberg when the City found out in April 2014 about a July 1, 2014, deadline to bid the project out to meet a state funding deadline. Chris was able to usher the design to completion in a few short months, including the sometimes time-consuming archaeological/historical process. 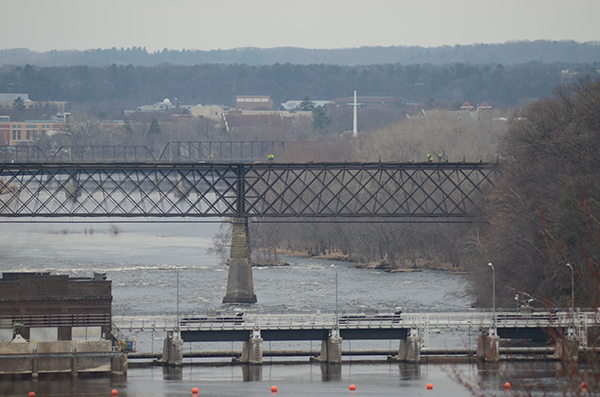